The Congressional Black Caucus is holding their annual conference in Washington, D.C. this week. The AFRO is reprinting this 1971 article about the founding members of the Black Caucus meeting with President Richard Nixon, one of the first actions the group took.

Washington-A historic meeting and a historic date were combined in the 95-minute session which the Congressional Black Caucus spent with President Nixon last Thursday discussing “the harsh conditions under which too many poor, black and other oppressed Americans are forced to live.”

They submitted to the President 60 recommendation for “persistent and far-reaching action” toward changing these conditions and set the historic date of May 17 as the deadline for Mr. Nixon to report progress along these lines to them and the nation.

May 17 was the date in 1954 when the Supreme Court outlawed racial segregation in public schools. This date in the words of Rep. Charles C. Diggs, of Michigan, chairman of the Black Caucus, “ushered in a new era of racial revolution.” 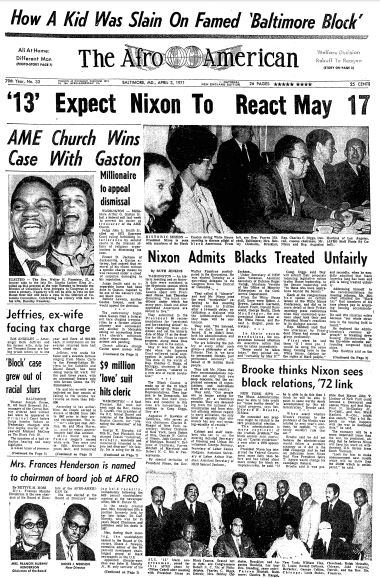 The Black Caucus is made up of the 12 black members of the House of Representatives. They happen to be Democrats, but point out that their interests and concerns in this case are non-partisan. In addition to Cong. Diggs, they are:

By special invitation of President Nixon, the Rev. Walter Fauntroy participated in the discussions. He was elected Tuesday as a non-voting delegate to the Congress from the District of Columbia.

They called it “historic” and said Mr. Nixon used the word “worthwhile” referring to this meeting which came from fruition after a 14-month delay, establishing a dialogue with the Administration which they hope will be continuous.

They said, “He listened but we don’t know if he heard. If he didn’t hear, both his administration and the country will suffer.”

They told Mr. Nixon that their recommendations represent not only their own deep concerns, but the expressed concerns of organizations and individuals from all over the country.

They said, “Our people are no longer asking for equality as a rhetorical promise. They are demanding from the national Administration and from elected officials without regard to party affiliation, the only kind of equality that ultimately has any real meaning—equality of results.”

In their recommendations, the congressmen focused attention on executive action that can be taken immediately.

“Some could be taken today,” they pointed out,  and “certainly by May 17.”

First when he told them, “If I were you, I would be doing the same thing. Coming here, fighting for the rights of black people,” and secondly when he candidly admitted that black America long has been and still is being treated unfairly.