By Akira Kyles, Special to the AFRO

One of the main problems for survivors of domestic violence is finding shelter to escape their situations. However, a Prince George’s County organization hopes to address this serious and dangerous issue, by assisting survivors attempting to leave with an app.

This summer, the Community Advocates for Family and Youth (CAFY) launched SafeNight, an app that will help users fund hotel stays for survivors. “Up until this point, if someone had to leave immediately for fear of threat, harm or sanity, we always had to say ‘Okay, what’s the game plan?’ because we could only do one night and sometimes three. But using SafeNight, we’re engaging the community to help resolve the problem,” Arleen Joell, founder and executive director of CAFY, told the AFRO. 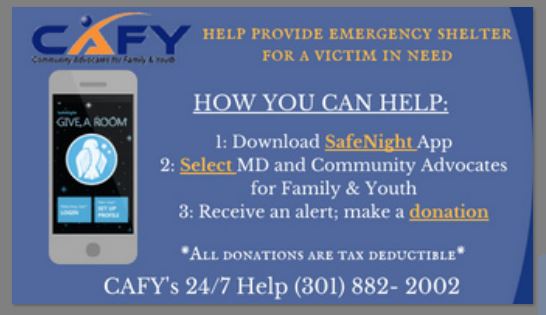 According to Katie Brown, CAFY’s victim services project specialist, they are the only organization in the D.C. area that has the app, which is used by domestic violence organizations around the country. Supporters of CAFY can download the app and support survivors no matter where they are in the country so they can get lodging much faster. The app helps survivors not only receive lodging but also have an extended stay if they need it.

“We have the relationships with hotels because we’ve been putting people in emergency stays for the last five years but what this allows us to do is extend that stay because maybe I’m not sure what’s going to happen and I need more than two nights to figure out how I’m going to keep myself or my children and I safe,” said Joell.

CAFY started in 2003, with the original intent to help children that were involved in the criminal justice system. The organization evolved into what it is today when Joell realized that there was much more that surrounded those children’s lives. “We consider ourselves somewhat as a social emergency room because we are focused on providing wrap around services to anyone that’s impacted by violence, crime, or trauma,” said Joell.

The organization helps about 1,500 survivors a year, on average, with about half of them coming from domestic violence. CAFY’s main agenda is to educate, empower, and embrace those impacted by harm or affected by crime. They offer various programs and services to help families move forward from trauma.

“If that trauma isn’t being addressed, then that burden is being carried around not fixed,” said Joell. “And part of the challenge is for too long we’ve embraced the mantra of ‘What happens in the home, stays in the home’ and we can no longer do that if we’re going to raise healthy, viable, loving children who are able to resolve conflict.”

In Fight Against Virus, South Africa Expects a Long Wait