By Renee Foose, Special to the AFRO

In the wave of marijuana legalization, the war on drugs is left in its wake.  Thousands of people remain incarcerated for cannabis convictions while non-offenders are profiting from cultivating, processing, and dispensing marijuana in states where it’s legal.  In many states where cannabis is now legal, offenders are prevented from working in the industry if they have a prior marijuana related conviction.

“Opportunities for employment, housing, education, and the right to vote are denied to many people, mostly African Americans” said Lauren Kruz, founder of Equity First, an organization based in Los Angeles, Ca. that promotes racial equity and reparative justice.  Kruz and Equity First are launching National Expungement Week later this month to provide free legal services to ex-offenders seeking to remove cannabis convictions from their record. The event will be held, Oct. 20-27, in cities across the country including Baltimore, Washington, D.C. and Prince George’s County.

Rachelle Yeung, an attorney and board member on the Minority Cannabis Business Association is the local organizer for the events scheduled in Maryland.  Yeung said a team of attorneys is volunteering to help felons with the process of erasing marijuana convictions from their records. The process of removing offenses from a criminal record can be complicated and involves a significant amount of paper work and fees, Yeung told the AFRO.

The attorneys onsite will review charges and convictions while helping offenders wade through the paperwork. She said the attorneys will prepare a Petition for Expungement and cover the cost of the fees involved. Petitions will then be mailed to the courthouse where the original case was heard for a judge to review and determine whether or not charges can be removed from the defendant’s file. The process can take several weeks at a minimum.

In Maryland approximately 40,000 felons are eligible to vote, Yeung said.  In 2016, the Maryland legislature overturned Gov. Larry Hogan’s veto of a bill to expand voting rights to felons ending an antiquated disenfranchisement law.

In 2018 the Legislative Black Caucus  successfully expanded the number of licenses issued for cannabis cultivation, processing and distribution to minority owned businesses.  This is a racial justice and equity issue, Yeung said.  “Expunging cannabis offenses allows black and brown people to work in the industry and gives them a second chance.  If we expunge just one record at every event, it’s a success” she said.

The day long events will occur in Baltimore on Oct. 20 and in Prince George’s County and Washington, D.C. on Oct. 27.  In addition, voter registration and workshops on resume building will be available at no cost. A listing of all the event locations nationally can be found at www.offtherecord.us. 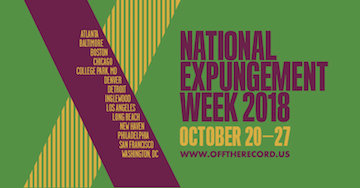 Maryland 529 plan: Benefits of Contributing to an MD 529 Plan

Maryland 529 plan: Benefits of Contributing to an MD 529 Plan

Black Officers are Torn Between Two Worlds Amid Protests

Protests Shift to Memorializing Floyd Amid Push for Change

Protests Force Some Stores To Close